Along for the Ride

Story and photos by John Bayne, Senior Vice President and General Manager at Corning Gorilla Glass. John joined the Food Bank Board of Directors in 2016. 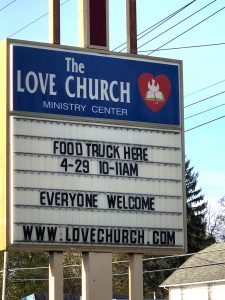 It is a privilege to serve on the Board of Directors of the Food Bank of the Southern Tier. One of the best parts is we have the opportunity to ride along with a Mobile Food Pantry truck during a delivery. I love this experience and try to do at least one ride along each year because I can actually see how the process works and interact with the people who benefit from the food.

Recently, I rode along with one of the newer employees, Larry, as he delivered to the Love Church in Horseheads. Even though Larry has only been at the Food Bank for a couple months, you would have thought he had been there for years. He had the truck packed and ready to go when I arrived, and had the delivery well-organized. On the short drive over to Lake Road, Larry spoke about how meaningful the job was, and how proud he was to tell his family how he makes a difference every day. 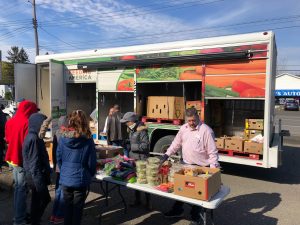 At the church, we were met by Pastor Joan and a big smile. She had volunteers ready to go help, including logging in the people who were going to get food to help make ends meet. It was a cool morning but as the sun came up, it turned into a beautiful day. We set up the tables and laid out the food – a great mix of pork, rice, lentils, oranges, cucumbers, eggplant, squash, potatoes, onions, cottage cheese, and margarine. People especially liked the selection of fresh produce. It was fun to hear people share recipes on how to cook eggplant and squash.

We had expected 100 people but the final count was 128.  As we returned back to the Food Bank, it was rewarding to know we had played a role in delivering a small portion of the close to 10 million pounds the Food Bank delivers each year. I can see why Larry and all of the Food Bank employees take such pride in their jobs. There is no nobler profession than serving others!

Learn how you can volunteer at the Food Bank!