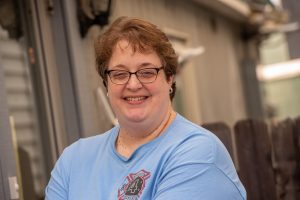 Kimberly Andreine, of Southport, is one of the millions of Americans who lost their jobs amidst the pandemic shutdowns.

In April, Kimberly Andreine, of Southport, did something she never thought she would have to do. She needed help with food. So, she went to a Community Food Distribution at the Chemung County Fairgrounds.

“This was the very first time I have ever used Food Bank services — or any services, for that matter — but because of the COVID-19 pandemic, I have been unable to work. I was turned down for unemployment. So,
I finally decided to ask for some help,” she said.

Kimberly was laid off from her job as a patient services coordinator at a physical therapy practice when her employer closed temporarily. Kimberly says she was denied unemployment benefits because she didn’t earn enough in 2019 as a part-time cafeteria worker. And then, she took a leave of absence from her office job in the final months of the year as her husband, Armondo, was losing his battle with cancer.

“I was forced to move from the house we were renting together into a small studio apartment that I could afford alone, and now this COVID-19 pandemic shut down my office for the time being,” she said.

Through April, Kimberly lived off only her income tax refund and federal stimulus payment. She lost her job permanently in May. It was not easy for Kimberly to admit — even to herself — that she needed help.

“I am a person who was raised to be responsible and accountable for myself. The sudden and unexpected loss of income was paralyzing. Especially being a new widow all alone,” Kimberly says. “It was very difficult for me to ask for help. My aunt uses Food Bank services and she and my mother encouraged me and told me how to use the website to register for food distributions.”

Kimberly attended the drive-thru distribution in mid-April. The number of vehicles lined up to receive food shocked her. She hadn’t realized the need was so great.

“When I got home and unpacked my car, I literally cried with both relief and gratefulness. I was completely overwhelmed with the amount of nutritious food the Food Bank provided for free,” she says. “God bless the Food Bank for what you do to help the volume of people who would go hungry without your hard work and dedication.”