Every year, Doug Mugglin of Corning donates his time to the Food Bank as a member of the Tour de Keuka bike ride planning committee and the Corning Incorporated Foundation makes a gift to the Food Bank on his behalf through its Dollars for Doers program.

Dollars for Doers is one of two employee programs funded by the Corning Foundation. In addition to a donation matching program, the foundation donates $150 for every 10 hours of volunteer time logged by any Corning employee for recognized charitable organizations. 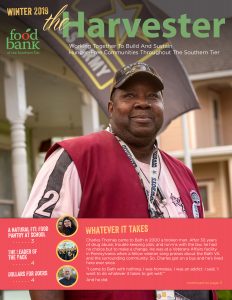 Read it in the Fall Harvester!

“The Food Bank is my first-choice charity,” says Doug, a Senior Finishing Process Engineer at Corning’s diesel facility. “In the past, before I worked at Corning, my family needed food assistance for a short time while I was between jobs after a down-sizing. Food is a necessity of life. It’s critical to children’s growth and a family’s well-being. When the budget’s too tight to afford enough healthy food, it raises stress levels fast.”

Doug has ridden the Tour de Keuka since 2012 and has helped with route management since 2015.

“The Food Bank does a fantastic job of stretching the dollars they receive into multiple, nutritious meals for our friends and neighbors in the Southern Tier. As a process engineer, I admire their efficiency and performance,” Doug says. “Plus, the Tour de Keuka is one of my favorite rides in this area, so it’s a double win for me to volunteer to help organize a great event that supports my favorite charity.”

We are grateful to the many Corning Incorporated employees who volunteer at the Food Bank, and to the Corning Foundation for promoting their involvement in community organizations.

Learn more
give a gift