In the Southern Tier, more than 72,000 of our neighbors struggle with hunger and may not know where they’ll find their next meal. Hunger affects many people in our region, including those who work full-time jobs, disabled individuals, seniors and children. 38% of the people we serve are children; 18% are seniors. 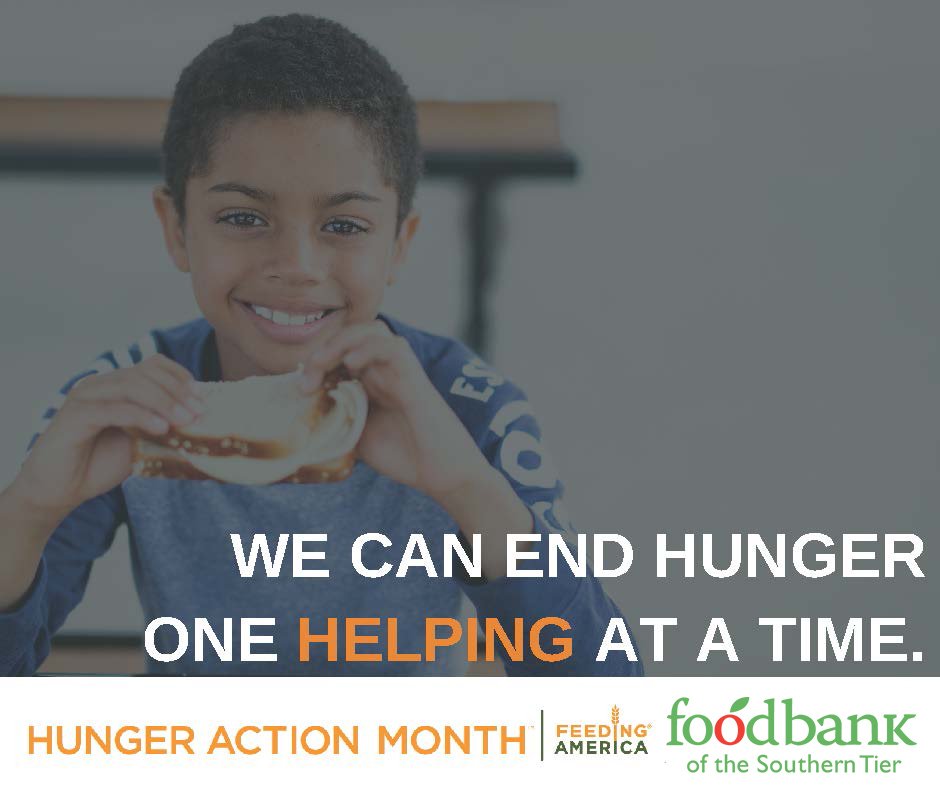 That is why, this September, the Food Bank of the Southern Tier joins Feeding America food banks across the country to take part in Hunger Action Month and inspire people to take action and raise awareness of the fact that 40 million Americans, including 12.5 million children and 5.5 million seniors, are food insecure.

“It’s vital to the health of our community that the people we serve have access to enough food to reach their full potential and thrive; especially our children, who cannot grow, succeed or learn when they’re hungry,” says Natasha R. Thompson, President & CEO of the Food Bank of the Southern Tier. “People facing hunger could be our neighbors, kids in our children’s classes and others, often much closer than we think. We hope our community will join us in taking one small action to help build and sustain hunger-free communities in the Southern Tier.”

We invite you to take the SNAP Challenge by committing to eat all your meals on just $4 a day, the average amount received by people receiving SNAP (formerly “food stamps”). Learn more!

This year’s campaign seeks 40,000 actions – a volunteer shift, a social media post, or a donation – from the public that will help end hunger one helping at a time.

Natasha is once again hosting the new season of Chasing the Dream on WSKG, an eight-week series that explores the road blocks  people in poverty face as they attempt to fulfill their American Dream. Chasing the Dream premieres Friday, September 13, 2019 at 8:30pm on WSKG-TV. Watch the trailer.

On Hunger Action Day – September 12 – 15 local businesses will come to the Food Bank warehouse for Leader of the Pack, a corporate packing challenge presented by Mengel Metzger Barr & Company. Combined, the teams have donated the equivalent of 112,500 meals for our neighbors in need and they’ll pack nearly 13,000 packs of food for kids in our BackPack Program to take home on weekends and school breaks.

September marks the twelfth year the Feeding America network has organized this annual call to action.  Click here to learn more about the Food Bank of the Southern Tier and other ways you can get involved for Hunger Action Month.  You can also join the conversation by posting photos or stories to social media with #HungerActionMonth, @foodbanksoutherntier and @FeedingAmerica.