It takes a village

Hunger relief happens when people come together in support of a shared mission. When schools and businesses began to close, officials at Cornell University contacted the Food Bank and partnered with the Greater Ithaca Activities Center to distribute food for up to 400 families twice a week.

“Cornell has been such a wonderful partner. They reached out to us and asked what more they could do. That’s very telling of where their heart is at, and so inspiring,” says Amanda Palme, Food Bank Programs and Partnerships manager. 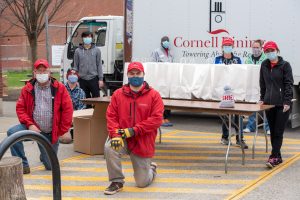 The university became a Food Bank partner agency when it established the Cornell Food Pantry in October 2019. The pantry — which is staff-run and serves anyone who is a faculty or staff member or student — has remained open during the pandemic, and Cornell Dining continues to provide meals to students who are self-isolated, on or off campus.

Cornell Food Pantry has increased its food orders from 2,000 to 3,000 pounds of food each week to up to 17,000 pounds, to meet the increased need of the greater Ithaca community. The Food Bank delivers food to Robert Purcell Community Center, where Cornell Dining staff offload and repack perishable and nonperishable food items. University staff distribute food at the Greater Ithaca Activities Center in downtown Ithaca.

The Food Bank has also worked with Tompkins-Cortland Community College to establish a Community Food Distribution on campus that can serve 500 households.

“People feel so out of control in so many ways,” says Mark Miller, Cornell Dining manager in Student and Campus Life. “They want something they can control and help with. Especially for people who remain on campus — our staff — this really gives them a meaningful way to be involved and feel like they’re making a difference.”

“Cornell has the staff base and resources to pre-box everything and they have the trucks to transport it to the distribution site. They’re doing a lot of boots on-the-ground work in Ithaca, making sure food is getting into the community,” Amanda says. “Our partners have really pulled together, each doing what they can to bring food to their neighbors who need it most.”

– The Cornell Chronicle contributed to this report.