Hunger relief happens when people with big ideas and a knack for pooling resources combine their shared passion for helping their neighbors. This compassion has been the fuel behind the development and growth of the Lansing Food Pantry.

The pantry operates free of charge in the Community Recreation Center on East Shore Drive in Lansing, serving about 80 families a month.

Until five years ago, the food pantry set up each month in the community room of a local church. All the pantry supplies were kept in a closet.

“It was very difficult for volunteers – mostly older – to set up and take down each time,” says Rosemary, Sciarabba, a volunteer of more than a dozen years.

Rosemary and Nancy Myers, who retired recently after more than 15 years as pantry coordinator, hatched a plan to find a permanent home for the pantry and the Community Rec Center seemed like the logical choice. Rosemary and her husband, Andy, lifetime Lansing residents, were already deeply invested in the Center. 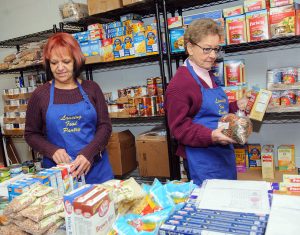 The Community Rec Center is a passion project for Andy. In 1986, Andy, a hockey dad, saw there weren’t enough facilities to accommodate teams. So, Andy, a founding partner of Sciarabba Walker Certified Public Accountants, began a fundraising campaign to create an ice rink. He raised $300,000 in pledges in 30 days. “Ten years later, 90 percent of those pledges were honored,” Andy says.
“He just never gives up,” his wife Rosemary says.

In 1996, The Rink opened and in 2001 The Fields were built. Governed as a not-for-profit organization, the Rec Center hosts thousands of youth and adult athletes each year and has become a center for community activity. Locals can purchase a gym membership and home-school groups play on the indoor fields in cold winter months.

The pantry also has a commercial grade freezer and refrigerator which allow for storage of frozen products, meat and dairy. Rosemary says the move to its own space also created autonomy for the pantry. A close-knit volunteer group grew even more connected, committed and able to respond to the community needs in their own space. During the government shutdown in January, they opened the pantry for a special distribution for TSA agents working without paychecks.

And in 2014 the Lansing Food Pantry moved into their dedicated space down the hall. It is clean and well-lit, is welcoming and provides a sense of community and comfort. There’s even a bright red bookshelf full of free books for kids. Toni is proud to have shopping carts from the Lansing Market, so clients can have a better shopping experience while they pick out their groceries. “It’s amazing what we’ve got going on in this little community,” Andy says.

The Rec Center is also home to the Lansing summer rec program, and plans are currently underway for the Rec Center to become a Summer Meals site, where kids can get free meals and snacks while they’re there. Andy says community support was always a focus at Sciarabba Walker and also in his post-retirement real estate ventures.

Concerned about a lack of services for seniors in Lansing, Andy and a few partners opened the Lansing Market in 2011, which was the only grocery store at that time in Lansing. Other stores and businesses followed, and Andy is doing whatever he can to encourage that growth.

“The community has been good to us,” Andy says. “This is how we give back.”