The sisters of Alpha Kappa Alpha have been working to help meet their neighbors’ basic needs since the sorority was founded at Howard University in 1908. When COVID-19 shutdowns began to take place across New York in March, members of the Finger Lakes chapter knew their communities would be hard-hit. So, they rallied their membership to strengthen their support of the Food Bank. 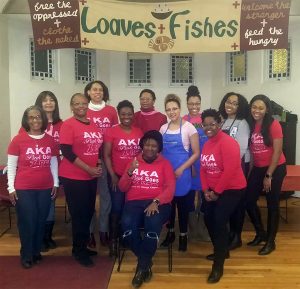 Members of the Alpha Kappa Alpha Finger Lakes Chapter have been committed to ending food insecurity for many years. *Photo taken before CDC recommendations for public mask use.

From April 13-May 13, AKA Great Lakes Chapter held a Rise Up 30 Days of Giving virtual service project encouraging sisters to donate at least $19.08 to their regional food bank.

“Many of us have been giving to the Food Bank for years,” says Tanya Saunders, president, AKA Omicron Nu Omega Chapter of Ithaca, and retired assistant provost for International Programs, Ithaca College.

The service project raised over $1,000 and gave local members an opportunity to engage directly with and learn more about the Food Bank of the Southern Tier.

“We’re not new to the issue of food insecurity,” says Millicent Clarke-Maynard, AKA life member and retired educator, Ithaca City School District. “Over the 36 years of our charter, we have always had a focus on food insecurity; by adopting a family, serving at local soup kitchen, developing partnerships with Southside Community Center and Loaves and Fishes in Ithaca, and with Ernie Davis Community Center in Elmira.”

“At both the national and local levels, AKA seeks not only to assist with immediate needs for access to food, healthcare, education and economic security but also with advocacy for systemic change that allows people in need to achieve and sustain upward mobility,” says Peggy Odom-Reed, AKA life member and senior lecturer, Cornell University School of Hotel Administration.

“I think it is important to remember that unless we become politically-engaged in changing the decision about who has access to what, 20 years from now we’ll be talking about the same issues,” Tanya adds. “These were the same issues when our sorority was formed in 1908.”