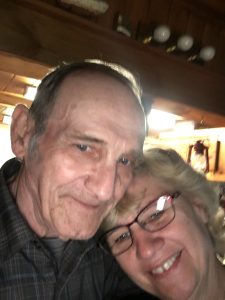 For two Food Bank volunteers, love wins even in a pandemic. ♥ In 2020, as the world reeled from COVID-19, the last thing on Joan Evingham’s mind was romance. She was busier than ever running the Campbell Mobile Food Pantry, and volunteering at the Rathbone site to provide much-needed emergency food support to her neighbors in need. Joan, a retired teacher, has always been committed to serving the Southern Tier community and has worked for decades to alleviate hunger.

Meanwhile, Dale Woodworth was traveling along a parallel path of service. A veteran, Dale was a member of the Cameron Fire Department for 43 years and is a dedicated volunteer at the Rathbone Mobile Food Pantry. “I do anything I can to help the community,” Dale says. His longtime partner passed away in 2019, and Joan’s husband died in 2018; the two couples had known each other from volunteering together over the years, but Joan and Dale were little more than acquaintances.

Then, in July 2020, Joan’s Facebook account was hacked. She posted a message to her network alerting them to the hack, and the next thing she knew, her phone was ringing. It was Dale, asking how he could help. “‘Are you alright?’ he asked. ‘Is there anything I can do to help you?’ Just knowing that someone cares made such a difference,” Joan shares.

Dale was persistent. “He’d call. He’d message me,” Joan says, with a laugh. “And by October I was scared to death, because I was a widow, and I hadn’t thought I’d ever feel those romantic emotions again. I told my sister, and she said, ‘Go for it, honey. Life’s too short.’”

Joan and Dale were married a few months later, in a ceremony officiated by both her pastor and his. They live together in Cranberry Lake, and continue to support each other to support their community, serving up a side of hope and inspiration with the food they so lovingly distribute.